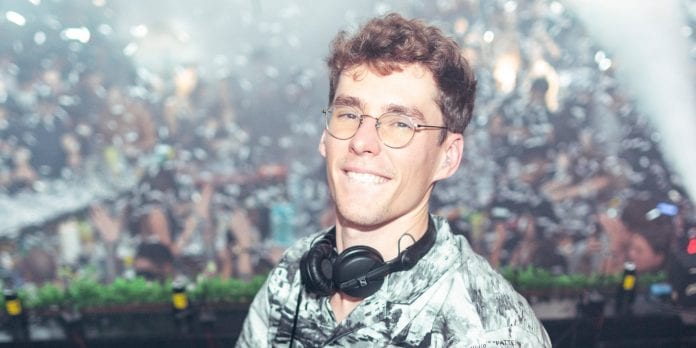 It’s already been more than two months that 400.000 people from all over the world visited the Holy Grounds of Tomorrowland and celebrated the festival’s 15th anniversary. Tomorrowland’s special anniversary edition had a lot of unique surprises in store for the People of Tomorrow. Belgian DJ and producer Lost Frequencies – the most played Belgian artist in the world – pulled off something memorable to celebrate 15 years of Tomorrowland. After hosting his own Lost Frequencies & Friends stage during the 1st weekend of the festival, the young Belgian prodigy had a bit of time left before playing the legendary mainstage on weekend 2. He decided to go help out the guys and girls working at one of the official TML by Tomorrowland boutiques at the festival site, by selling Tomorrowland apparel & accessories undercover disguised as shop manager to the festival goers. Check out here how things took an unexpected twist and how Lost Frequencies turned the store into one massive surprise party for the lucky few!

Lost Frequencies has released his new album ‘Alive And Feeling Fine’ last week. The Belgian DJ & producer is going on a fully live tour in the US and Europe throughout October and November.

OVER ONS
TMM Media is your News, Entertainment, Celebrity website. We provide you with the latest breaking news and videos straight from the media industry. Contact us =>> info@tellmemore.media
VOLG ONS
© TMM MEDIA - ULTRA MUSICA 2010 / 2023 - ALL RIGHTS RESERVED - BE 0770.416.164